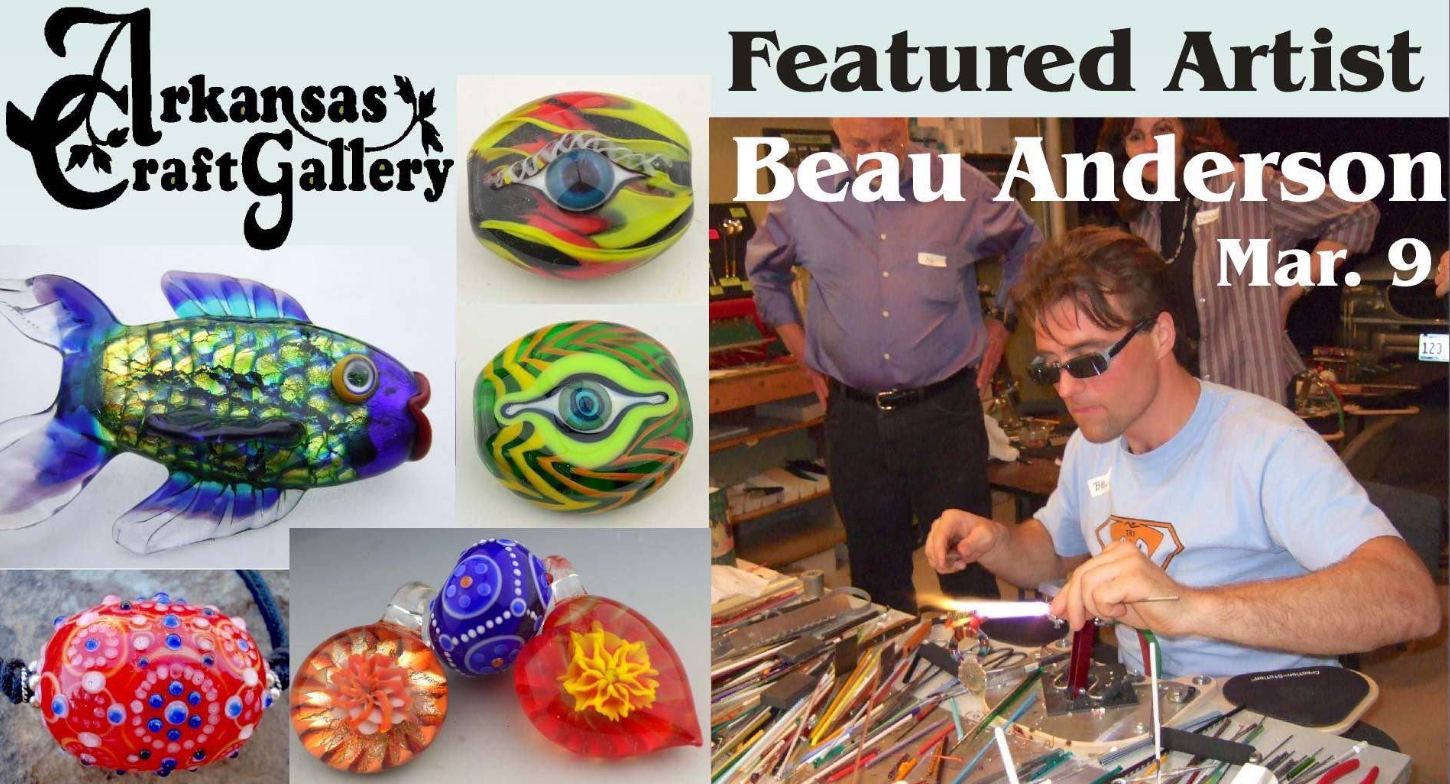 Beau Anderson, glass artist, will be the Featured Artist in the Arkansas Craft Gallery Saturday March 9 from 10 to 5.  Beau was born in Bellingham, Washington in 1980 to parents who were artists, outdoor adventurers and avid cyclists.  While in home school Beau focused on glass beadmaking alongside his mother, Sage Holland and woodworking with his father, Tom Anderson. Sage introduced Beau to the torch by age seven.  He became a student of all things creative via Montessori and home schools, Waldorf Schools and Whatcom Community College as a part of the arts community by 1988.After moving to Arkansas in 1993 he continued his glass beadmaking to the extent that he became a passionate teacher of the art form, pairing up with his family to generate new designs together and spread the unlimited freedom within techniques found in the history of glass. Along with his historian step-father, Tom Holland, he researched ancient glass in museums and private collections. Beau has demonstrated and taught the art of flame working soft glass throughout the Americas and the world since the early 1990s at small private studios as well as schools and institutions such as Corning Museum of Glass, Pittsburgh Glass Center, Pilchuck Glass School, the Mussee de Perle in France, and The International Glass Beadmakers Gathering, as a member. He’s also a member of the Glass Art Society and Arkansas Sculptors Guild. He developed a revolutionary new bead release technique, called Liquid Core, using a tungsten rod as a mandrel, a method he’s been using since about 2003.  He sells kits with instructions in this method, plus beads from the entire family at http://beauxbead.com. Updates on classes and shows can be found on several Facebook profiles of family members.He has been featured in Ornament Magazine, Bead and Button magazine, in Cindy Jenkin’s book, Beads of Glass, 1000 Glass Beads by Lark Books, and The History of Beads by Lois Sher Dubin, Abrams Books, among others. Beau has had the honour of installing studios and demonstrating in the Flame working arts in France, Ireland, Switzerland, Spain, and Northern India in the Tibetan home of the Dahli Lama, as well as Stone County, Arkansas and North Little Rock.After sharing his love for glass in many workshops he began creating 3 dimensional forms in glass. In 2008 Beau was fortunate enough to take a workshop with the Master in Soft Glass Sculpture, Lucio Bubacco in Murano, Italy. Since then he has been pursuing the elegant fluid expression of Flame worked Soft Glass Sculpture, integrating nature with human forms in frozen motion, communicating their complex interdependence. Beau and his family members are a part of the Off the Beaten Path Studio Tour Sept. 13-15 at the QMC Building on Sawmill Road, north of Mountain View.  As members of the Arkansas Craft Guild, they will again have a booth at Artisans Market on the Square during Arkansas Folk Festival, April 19 and 20 in Mountain View.  The Guild was incorporated in 1962 as a for-profit cooperative to market quality handicrafts, and to further develop the skills of these artisans, now headquartered in Mountain View at the Arkansas Craft Gallery, open Tuesday throught Saturday from 10 to 5.